The STREET*CREDS® Model For Savvy Conversations®

Make sure your conversations are a two-way street.

Does the idea of having a difficult conversation fill you with fear? Do some exchanges leave you feeling frustrated, upset or angry? Have you ever avoided talking about something important because you simply couldn't face it?

Now imagine having effective conversations every time that you engage with someone, regardless of the subject. That is, communication in which everyone is involved, aware of themselves and others, and committed to a positive outcome.

Such open, honest and effective conversations are the aim of the STREET*CREDS framework. In this article, we'll explore the model, and the related concept of Savvy Conversations, and how applying them can promote a sense of harmony and purpose in your team's communications.

"Street cred" is a slang term that refers to the respect you gain when you demonstrate capability, reliability and authenticity, and these qualities are the inspiration for the model.

What Are Savvy Conversations?

Sarah Harvey, a U.K.-based communications specialist, developed STREET*CREDS in 2013 to improve communications in the workplace. The model is designed to enable what Harvey calls "Savvy Conversations."

The word "savvy" means well-informed, perceptive and shrewd. It has its origins in the French term, savoir faire, which means "know-how." Unlike "difficult" conversations, savvy conversations give you clarity and action, without conflict.

Examples include resolving differences of opinion with colleagues, and dealing appropriately with poor performance issues during one-on-ones and appraisals.

STREET is an acronym for the six principles of the model. You'll need to apply all six to get the results that you want, while maintaining positive relationships. STREET stands for:

Once you've considered the STREET principles, you can make your conversation savvy by applying the five aspects of CREDS. They are all essential ingredients, and each affects the others, so Harvey represents them as interlocking cogs, rather than a step-by-step list. This is shown in figure 1, below.

Figure 1. The Five Cogs of CREDS Essential to a Savvy Conversation. 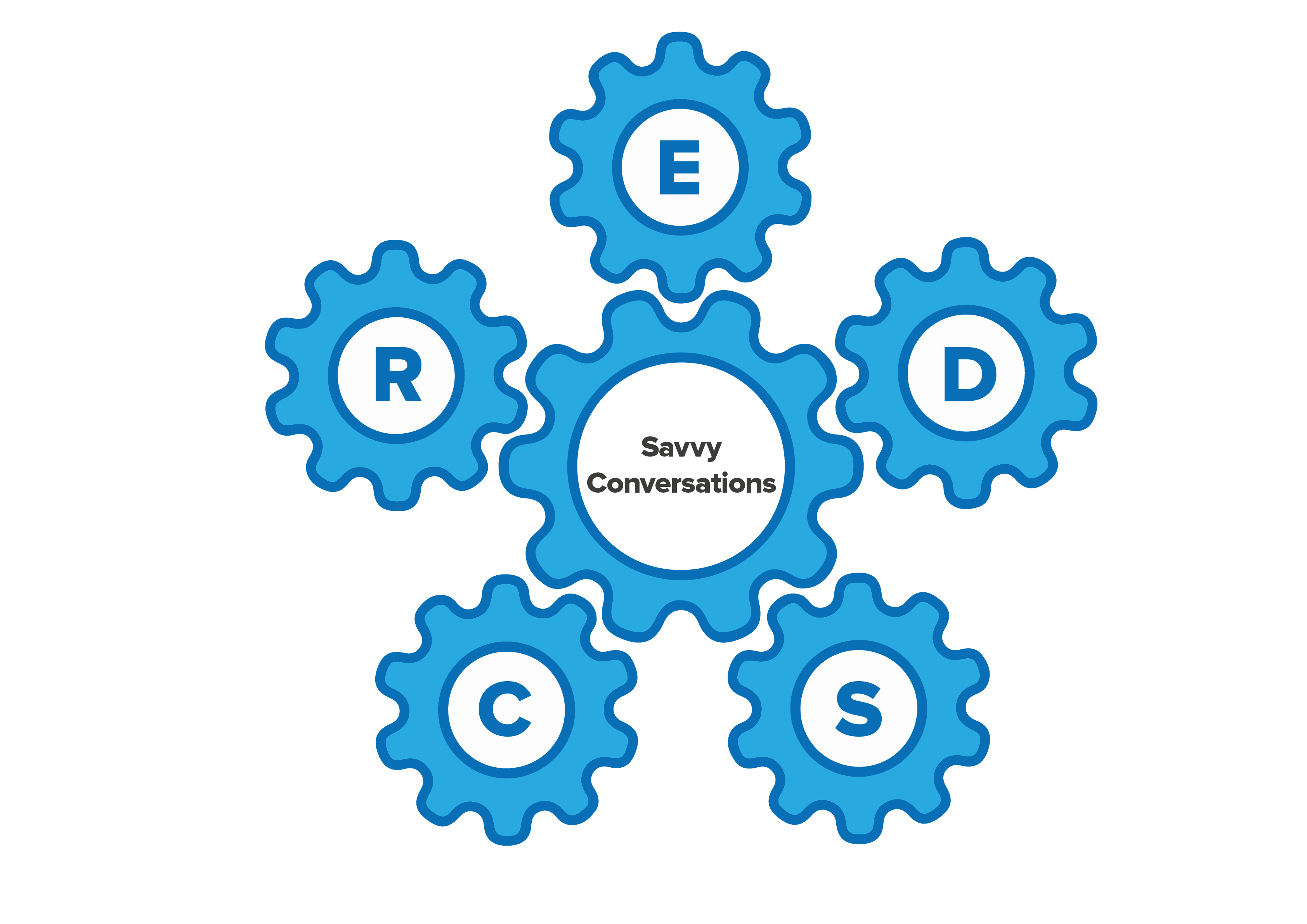 Reproduced with permission of Sarah Harvey of Savvy People Management.

You can learn another 148 communication skills, like this, by joining the Mind Tools Club.

The five cogs are Candid, Respectful, Engaging, Direction, and Sensitive. Be sure to adjust the "volume" or emphasis of each cog according to the requirements of your conversation. Your intended outcome may be compromised, and the relationship between participants damaged, if one of the CREDS cogs is missing from the conversation.

Let's look at each aspect of CREDS in more detail:

A conversation should be frank and truthful, especially if the subject is difficult or sensitive. Being aggressive or self-righteous violates the Safety principle (above). But, Harvey says, don't tiptoe around the truth or you may damage the principle of Trust.

For example, let's say a team member, Robert, is performing poorly. His work is sloppy, he misses deadlines, and he's unprepared for meetings. A Candid conversation needs to address these issues openly, but without being judgmental or aggressive.

You will seem rude if you are Candid without being Respectful. So, politeness, kindness and consideration for the person you're speaking to are important. Speak to others as you'd like them to speak to you, and create an atmosphere of trust and professionalism.

In the case of Robert, let him know that there are parts of what he does that you greatly value, and speak to him in a pleasant tone of voice that demonstrates your respect.

A conversation should be worthwhile for all concerned, so invite buy-in and commitment from everyone involved. Create a two-way conversation and show that you are listening. A savvy conversation is a dialogue, not a monologue!

Robert will likely not want to open up if he feels threatened. To avoid this, make sure that you're friendly and collaborative. Be clear that you want him to improve his performance for his own good and for the sake of the team, not just to hit targets.

Don't delay the conversation, and avoid wasting time once you've begun. Having a strong sense of Direction will keep your exchange Candid, and you'll show Respect for people's time if you get to the point quickly.

For example, be clear with Robert that his approach needs to improve, and agree on goals for achieving that. But emphasize that no bad feeling will result from his previous poor performance if he succeeds in turning things around. At the same time, beware of focusing so much on Direction that you lose the Respectful and Engaging aspects of CREDS!

Balance the Direction of your conversation with being Sensitive. For example, take a moment to consider whether this is the right time for you both to have this discussion. Is this the right place, or do you need to find a more private setting? And how can you make the tone of the dialogue responsive to the feelings and reactions of the person involved?

In our example, Robert might be edgy and nervous, and primed for the "fight, flight or freeze" response. So, show empathy, and listen mindfully to what he has to say, even if he is being critical of you.

Savvy conversations are dialogues that deliver clarity, resolution and action without leading to conflict or distrust. The STREET*CREDS model can help you to create savvy conversations if you adhere to the following principles:

Then apply all five CREDS "cogs" in the right proportions to your conversation:

Join the Mind Tools Club before midnight, April 9 and get a FREE copy of the Make Time for Success Workbook!

Get Mind Tools for You and Your Colleagues

Help your people reach their potential by finding out about Mind Tools and other corporate learning products from Emerald Works.

The following are trademarks: STREET*CREDS® and Savvy Conversations® (see www.savvyconversations.co.uk).