Key in the correct punctuation for clear commmunication.

Callum stares in horror at the email from his manager, Lynne. He worked hard on the newsletter, and it should have been great… but.

"The punctuation is appalling," Lynne has written. "It looks unprofessional. We need to talk." Lynne has covered his final draft with corrections, many of which he doesn't even understand. What was the difference between a colon and a semicolon?

The problem Callum faces is a common one. Many people find punctuation tough and, if it isn't your strong point, you risk producing substandard written work.

In this article, we look at periods, commas, colons, and semicolons – punctuation that adds pauses and which helps you to keep your sentences under control. (For Mind Tools Club members, we'll look at apostrophes, quotation marks, hyphens, dashes, and brackets in our follow-up article, Punctuation Basics – Part 2.)

Punctuation is the use of special marks to enable readers to understand a piece of writing. Good punctuation follows the rhythms of speech, telling the reader to pause at the right points and to organize the information in the document that he or she is reading. It reduces misunderstandings and makes the writing clear.

A good way to check that you've punctuated your written work accurately is to read it aloud. If you feel the need to pause anywhere, consider adding a comma.

Some rules of punctuation are fixed, while others vary in the way that they are used between countries and organizations. Remember that the rules are there to aid communication; they're not there just for their own sake.

When you overlook, forget, or wrongly apply the rules, the words you write can give quite the wrong idea. For example:

I enjoy cooking my family and my cat.

I spoke to my sisters Mike and Paul.

I enjoy cooking, my family, and my cat.

I spoke to my sisters, Mike, and Paul.

If you're really struggling with a paragraph or sentence that has complex punctuation issues, rewrite it. Two or three short, clear sentences are better than a long, awkward one. If in doubt, keep it simple.

When to Use Commas

Commas break sentences up into smaller parts that are easier to understand. They signify natural pauses, segregate pieces of information, and separate items in a list, whether nouns or adjectives.

You can use a comma to insert a natural break between two parts of a sentence, or to join two short sentences. For example:

He ran down the street as fast as he could, and tripped over his shoelaces.

Here, the comma (together with "and") joins the two sentences "He ran down the street as fast as he could" and "He tripped over his shoelaces." Commas of this kind reflect the fact that you sometimes need to pause your train of thought to make sense of the words.

Commas are also useful when you want to insert groups of words that add new information to a sentence, but which don't change its basic meaning. For example:

Michael, who was taller than James, was the eldest of the children.

"Michael was the eldest of the children" makes sense on its own, but commas allow you to add the fact that "Michael was taller than James" without simply sticking it awkwardly on the end of the sentence.

Commas can help you to clarify meaning, too. For example…

David's brother George is an architect.

…shows that David has a brother called George, who is an architect. The meaning of the sentence wouldn't be significantly different if you left out the name "George." On the other hand, the commas in…

David's brother, George, is an architect.

…tell you that David has only one brother, called George, and that he's an architect – a subtle difference.

You can also use commas to separate parts of a sentence that are there just for emphasis, as in:

Steel, of course, is denser than wood.

Lastly, a comma is needed after "However" whenever you use it to mean "on the other hand." For example:

However, steel is less dense than lead.

You can also use commas to separate items in lists, but how you do it may depend on where you are in the world or on the style rules of your organization. (For Mind Tools Club members, we'll cover "house style," and different interpretations of punctuation conventions, in our follow-up article, Punctuation Basics – Part 2.)

One fixed rule is that lists of three or more items need a comma between the first and second items. A comma is also needed between the second and third items if the list has four items, and so on. Using or omitting a comma before the final "and" is where disagreements arise. This final comma is called the serial comma or the Oxford comma. So, you could write:

I always have eggs, toast and coffee for breakfast.

I always have eggs, toast, and coffee for breakfast.

They are both right. The important thing is to be consistent in your use.

The meeting was long, intense, and productive.

It's often wise to use the serial comma if a list is more complex than a series of one- or two-word items.

When to Use Periods and Other End Marks

A period or full-stop marks the end of a complete sentence that is not a question or an exclamation. It looks like other marks such as decimal points (as in "2.5") and abbreviation points (as in "U.S.A." or "etc."), but it does a different job. It ends a unit of sense and marks a similar, but longer, pause in the reading process than commas do.

You can also use periods at the end of phrases that are not full sentences, although you won't usually do this in business writing. For example:

I like to break my writing up. You know, for effect.

Question marks are there for when you're asking for a response, as in:

Should I bring all the documentation to the meeting?

Is Leah going to see the CEO?

I wonder whether Leah is going to see the CEO.

…are punctuated correctly, but not...

I wonder whether Leah is going to see the CEO?

Using question marks accurately is particularly important in emails. Readers often scan them quickly to pick out questions that may require action.

Exclamation marks are useful when you want to indicate shock, surprise, anger, or emphasis. But, be sure to use them sparingly, and only one at a time. They can make your writing seem overexcited or frivolous – especially if you combine them with question marks – and you'll likely want your professional writing to be measured and serious.

When to Use Colons and Semicolons

The colon divides a sentence into two parts. The first part introduces an item, and the second part says something more about it, defining, explaining or expanding the first part. For example:

The problem is simple: we have no money.

You can use the colon to introduce a list:

The cost of tickets includes the following: transport, admission and refreshments.

You can also use it to introduce quoted material:

Pope's position is clear: "To err is human; to forgive, divine."

A colon is never preceded by a space, or followed by a hyphen. The punctuation mark :- does not exist in standard English.

The semicolon indicates a pause between two complete sentences that has less force than a period. It combines the two sentences into a single sentence made of two closely related parts.

You can use a semicolon when:

Here are some examples of the semicolon in action:

James sat in the kitchen; Frank went upstairs instead.

Call me tonight; you can give me a full update then.

You could leave each of these examples as two separate sentences, and they would still make sense. Alternatively, you could join them with "and" and a comma. However, they would sound more stilted, and less natural when spoken out loud.

Semicolons should also be used in place of commas before some connecting words and phrases, such as "however," "therefore," and "for example," as in:

You should bring warm clothing; for example, gloves, sweaters, and hats.

Accurate punctuation ensures you are understood properly. Effective written punctuation follows the patterns of speech, and you can test it by reading your work aloud.

There are some firm punctuation rules to follow. Where you come across variations, as with the serial comma, be consistent in your use.

The most important punctuation marks that add pauses are the:

Click on the thumbnail image below to see Punctuation Basics represented in an infographic: 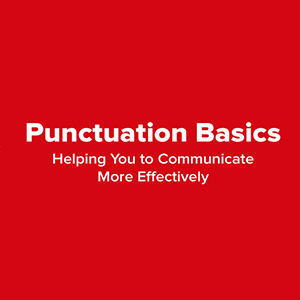 FREE 36-page workbook to help you beat stress, protect yourself from burnout, and stay calm under pressure. Subscribe before midnight, July 7 to download for free.

FREE 36-page workbook to help you beat stress and stay calm under pressure. Subscribe before midnight, July 7 to download for free.

Download Now
1 Day to Go!
Allow Your Team to Learn From Home