Spot a Dishonest Argument and Avoid Misleading Others

Some things aren't how they first appear.

"In a study designed by a famous academic to test the effects of pleasant imagery on motivation, employees were shown images of baby animals and beautiful nature scenes for their first five minutes at work.

"Amazingly, results showed a 10 percent leap in profits in the first quarter and record earnings over the course of a year. So, showing employees pleasant images is a great way to increase their motivation and improve productivity."

What do you think about the argument you just read? Do you believe the conclusion?

The argument contains a number of logical fallacies. But don't worry if you believed the conclusion: the passage contains some very common (and effective) tactics for manipulating reason and logic. This article shows you what they are, and how to spot them.

What Are Logical Fallacies?

A logical fallacy is a statement that seems to be true until you apply the rules of logic. Then, you realize that it's not. Logical fallacies can often be used to mislead people – to trick them into believing something they otherwise wouldn't.

The ability to discern a valid argument from a false one is an important skill. It's a key aspect of critical thinking, and it can help you to avoid falling prey to fake news.

Let's examine the most common logical fallacies, so that you can recognize them and know how to avoid them if you come across them in your working life.

Remember the example at the start of this article? It relied on two of the most common logical fallacies: appeals to authority and false inductions. Let's look at both in more detail.

This is where you rely on an "expert" source to form the basis of your argument. In the passage at the start of this article, the apparently expert source is "a famous academic." Mentioning an academic tends to imply authority and expertise, and that your argument is backed up by rigorous research. The effect is even stronger when you use a real name.

But name-dropping alone is not enough to "prove" your case. Even if the academic is real, and their research is genuine, it may not necessarily support your argument – it may be misquoted, misunderstood, taken out of context, or contain important caveats that undermine the point you are trying to make.

Try not to rely too heavily on a single expert's authority, or on a single source of data.

A false induction is often called a "non sequitur," which translates from Latin as "it does not follow." This fallacy gets you to infer a causal relationship where none is evident. Just because something happened before something else does not mean that there is a logical, causal link between the two.

In our example, showing pleasant images to the employees may or may not be linked to the company's improved performance. Many other factors could have been involved.

It also concludes that improved productivity is the result of increased motivation. This is another false induction. Whether or not the pleasant images had a direct impact on motivation, and therefore productivity, is not demonstrated in the example at all.

The slippery slope argument relies on making you think that the worst that can happen will actually happen, if you take a particular course of action. Of course, this is not necessarily the case.

"If we allow Susan to leave early, soon we'll be giving everyone Friday afternoon off."

This kind of argument crops up often. But, on closer inspection of the example, you can see that it's illogical to conclude that you will have to give absolutely everyone an afternoon off, every single week, just by allowing one employee to leave early one time.

Here, you are led to believe in an idea or proposition simply because it's popular or has lots of support. But the fact that lots of people agree with something doesn't make it true or right.

"We surveyed all the customers in the store and they all agreed that staying open 24 hours would be a great idea. We need to put together a 24-hour schedule as soon as possible."

In fact, you need to ask some further questions before you can draw any kind of conclusion from an informal survey such as this.

For example: who were these people? Would they actually purchase something from the store at 2 a.m.? If so, how often? What are the costs versus the benefits of such a plan?

At the same time, keep in mind that just because lots of people believe in something doesn't mean it isn't true. Always try to think critically and don't be led by forceful arguments.

The "appeal to tradition" fallacy is similar to the bandwagon fallacy. Here the argument centers on something that has "always" been done, or that is a widely accepted practice. For instance, "We've always hired the CEO from among the ranks. If we look outside there will be too much disagreement and discord."

The false dichotomy fallacy depends on an "either-or" argument: you provide only two options and force people to choose between them. In fact, neither choice may be the best, and there may be many other options available. But the argument makes it look like the suggested option is the only feasible one.

"We as the Board can either choose to approve this initial public offering or we can suffer slow annihilation at the hands of our competitors."

In this example, there are almost certainly other options that the Board could consider. And is raising capital even the answer to improving or maintaining the company's competitive position?

The straw man fallacy involves creating a false argument and then refuting it. The counterargument is then believed to be true. By misrepresenting an opposing position (and then knocking it down) your own preferred position appears stronger.

A local politician plans to expand the municipality's cycle network and to add several new speed cameras in densely populated areas. Their opponent says, "They want us all to give up driving forever. They're punishing the honest car owners and commuters that help pay these politicians' salaries."

By arguing that the proposed changes are an attack on motorists, the opponent has knocked down the position much more easily than if they tried to address the actual concerns the proposal is dealing with – in this case, a spike in fatalities due to traffic collisions and pollution levels.

Unlike a straw man argument, a straw man proposal is an effective process when it is used with clear and honest intentions.

The No True Scotsman Fallacy

Sometimes called an "appeal to purity," this is a way to dismiss flaws in an argument, or criticisms of it.

No matter how compelling the counterargument may be, the person committing this fallacy "moves the goalposts," and shifts the terms of the argument so that the contradictory evidence does not apply.

Andy thus changes the terms of the argument, implying that Dougal is not a "true" Scotsman in order to support his own position.

This means that you draw attention to the positive aspects of an idea and ignore the negatives. You are trying to make your argument more persuasive by providing only half the story.

"I know that our TV advertisements are more effective than radio. The numbers show that we hit twice the audience with TV, and our focus groups remember the TV commercial 38 percent more than the radio slot."

What this argument fails to address is the cost and return on investment of TV commercials versus radio. Does the 38 percent increase in retention translate to sales conversions? What percentage of radio listeners versus TV watchers actually buy the product?

It's easy to slip into observational selection if you become attached to an idea, especially if you were involved in generating it.

The "statistics of small numbers" fallacy is a similar concept. Here, you take one observation and use it to draw a general conclusion.

For example, "I would never use Gaudi Brothers to supply our paper products. My wife's company used them and they short-shipped products and back-ordered them."

This opinion is based on one bad experience, and it doesn't necessarily mean the company is always unreliable. Perhaps the purchasing company was late submitting orders or late paying their invoices.

How to Avoid Logical Fallacies

To spot logical fallacies, you need a basic understanding of how an argument works. In logic, an argument is a set of statements where one statement is inferred from the other (or others). There are two types of statements:

For an argument to be valid or logical, the premises must fully support the conclusion. They do this in one of two ways:

Here you start with general premises and reach a specific, certain conclusion.

Premise 1: Trucan Supply decided that to minimize redundancy costs, it would limit its layoffs to the New York facility only.

Here you start with specific premises and reach a generalized conclusion. This "bottom-up" logic uses premises to reach a conclusion that is probable, but not certain. (Read our article on Inductive Reasoning for more on this.)

Premise 1: April promotions over the last five years have increased sales by 15 percent, on average.

Premise 2: Over this period, summer promotions have not produced any measurable increase in sales.

Conclusion: To increase sales, it is better to have this year's promotion in April rather than in the summer.

To check whether an argument presented to you has a firm grounding in logic, apply these two tests. If it passes, you can be confident that the argument is sound. If it doesn't, ask for more information and supporting evidence.

You can see our infographic on Logical Fallacies here: 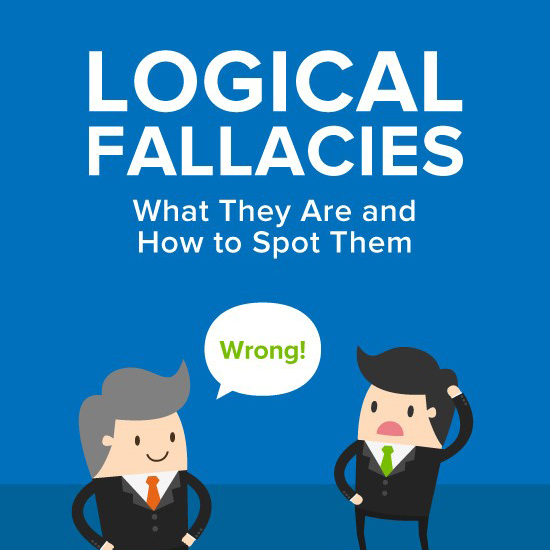 Logical fallacies are arguments that may sound convincing, but are based on faulty logic and are therefore invalid.

They may result from innocent errors in reasoning, or be used deliberately to mislead others.

Taking logical fallacies at face value can lead you to make poor decisions based on unsound arguments. And using them yourself – even by mistake – can damage your reputation.

Knowing how to spot them is a valuable skill. You can do so by learning how a logical argument is constructed, and by thinking critically about the arguments that you hear and read.

Get a FREE Team-Building Activities Toolkit, when you join the Mind Tools Club before midnight, February 21. Get a FREE Team-Building Activities Toolkit, when you join the Mind Tools Club before midnight, February 21.

Get Mind Tools for You and Your Colleagues

Help your people reach their potential by finding out about Mind Tools and other corporate learning products from Emerald Works.