Choosing the Solution With the Most Impact

Use this approach to identify which challenges you should tackle first.

Imagine that you've just been promoted to head of department. You're brimming with ideas about how to improve things, so where do you start?

Ideally, you want to focus on fixing the problems that have the biggest impact. But how do you decide which one to tackle first?

Pareto Analysis is a simple decision-making technique for assessing competing problems and measuring the impact of fixing them. This allows you to focus on solutions that will provide the most benefit.

In this article, we'll show you how to carry out a Pareto Analysis, and explain how to use your findings to prioritize tasks that will deliver the greatest positive impact.

What Is Pareto Analysis?

Pareto Analysis uses the Pareto Principle – also known as the "80/20 Rule" – which was coined by Italian economist, Vilfredo Pareto, in his 1896 book, "Cours d'économie politique."

The figures 80 and 20 aren't "set in stone," and should be taken as a guide. The Pareto Principle illustrates the lack of symmetry that often occurs between the work you put in and the results you achieve. For example, you might find that 13 percent of work could generate 87 percent of returns. Or that 70 percent of problems could be resolved by dealing with 30 percent of underlying causes.

Now, we'll take a look at how to carry out a Pareto Analysis:

Write out a list of all of the problems that you need to resolve. Where possible, gather feedback from clients and team members. This could take the form of customer surveys, formal complaints, or helpdesk logs, for example.

2. Identify the Root Cause of Each Problem

Next, get to the root cause of each problem. Techniques such as the 5 Whys, Cause and Effect Analysis, and Root Cause Analysis are useful tools for this.

For example, if you want to improve profits, you could score problems by how much they cost. Or, if you're trying to improve customer satisfaction, you might score them based on the number of complaints that you've received about each.

Use the root cause analysis that you carried out in Step 3 to group problems together by common cause. For example, if three of your problems are caused by lack of staff, you could put these into the same group.

5. Add up Scores for Each Group

Now, add up the scores for each group that you've identified. The one with the top score should be your highest priority, and the group with the lowest score your lowest priority.

Finally, it's time to take action! Your highest scoring problem will likely have the biggest payoff once fixed, so start brainstorming ideas on how to solve this one first.

You may find that your lowest-scoring problems aren't worth bothering about, particularly if they are very costly to fix. Use your Pareto Analysis to save your energy and resources for what's important!

While this approach is great for identifying the most important root cause to deal with, it doesn't take into account the cost of doing so. Where costs are significant, you'll need to use techniques such as Cost/Benefit Analysis, and Net Present Value (NPV) and Internal Rate of Return (IRR) to determine which changes you should implement.

Increase your productivity and reduce stress with this FREE toolkit when you join the Club before midnight, March 4.

Jack has taken over a failing computer service center, with a host of problems that need resolving. His objective is to increase overall customer satisfaction.

He decides to carry out a Pareto Analysis to assess and prioritize the biggest issues facing the center. He starts by listing these (see the Problem column in the table, below). He then identifies the underlying causes behind each (see the Causes column). Finally, he scores each item by the number of customer complaints that each has received (see the Score column).

Jack uses his analysis to group problems together by cause, then adds up the scores for each group identified. He is now able to order the main causes affecting the center, starting with the one that has attracted the highest number of customer complaints: 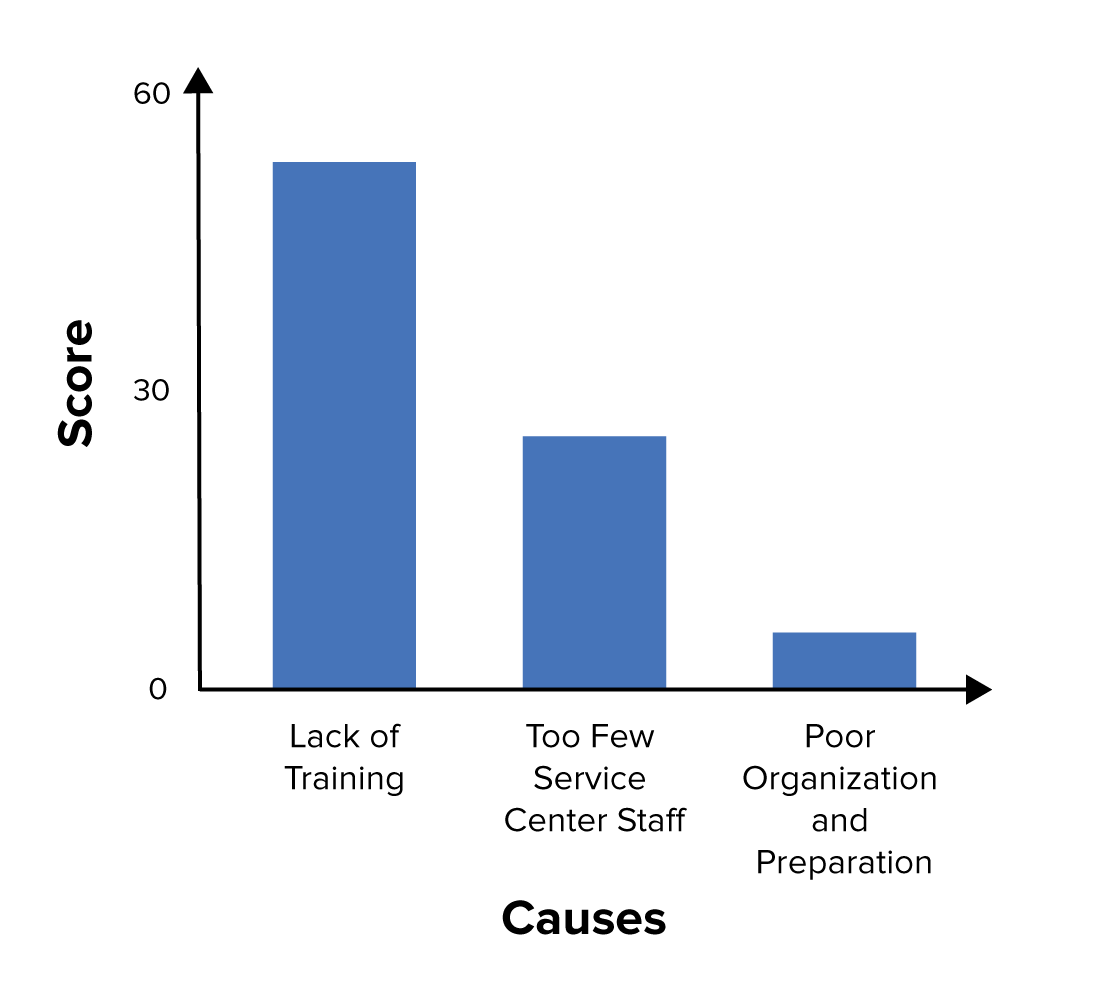 As you can see from figure 1, above, the business will benefit most from giving staff more training, so Jack should tackle this first. He could also look to increase the number of staff in the call center. However, it's possible that this won't be necessary – the provision of further training may help to reduce customer complaints and increase staff productivity.

Jack's Pareto Analysis has enabled him to quickly identify the areas of the business that face the biggest challenges, so he can focus his efforts where they are needed most and prioritize issues that will provide the biggest payoff to the business. This will likely save him a great deal of time and money that he might otherwise have spent trying to fix a range of different issues, some of which may have provided very little benefit.

Pareto Analysis is a simple decision-making technique that can help you to assess and prioritize different problems or tasks by comparing the benefit that solving each one will provide.

It's based on the Pareto Principle (also known as the 80/20 Rule) – the idea that 80 percent of problems may be the result of as little as 20 percent of causes.

To use Pareto Analysis, you first need to identify and list the problems that you face, and their root causes. Then, score each problem according to its impact (the scoring system that you use will depend on the types of problems that you are attempting to fix).

Group the problems together by cause and add up scores for each group. This will allow you to identify the problems that will have the biggest benefits if resolved.

Finally, use your findings to prioritize your workload, so that your efforts can be directed toward issues that are the most impactful, and away from problems that are less impactful.

Get unlimited access to all our career tools, plus this 40-page time management toolkit FREE when you become a member of the Mind Tools Club before midnight, March 4.

Download this popular 40-page toolkit for FREE when you become a Club member before midnight, March 4.

Get the Free Toolkit
1 Day to Go!