Embrace the wonder of the cultures around you.

Corporate culture is one of the key drivers for the success – or failure – of an organization. A good, well-aligned culture can propel it to success. However, the wrong culture will stifle its ability to adapt to a fast-changing world. So, how do you attempt to understand your corporate culture? And what steps can you take to create a strong corporate culture that will best support your organization's activities?

In their classic 1982 book, "Corporate Cultures: The Rites and Rituals of Corporate Life," Terrence Deal and Allan Kennedy proposed one of the first models of organizational culture. When the book was published, it had many supporters, although there were also many who felt the idea of corporate culture would be just a passing fad. Now that we are in the next century, the notion of corporate culture is widely accepted to be as important a business concept as financial control and employee satisfaction.

In their work on the subject of culture, Deal and Kennedy suggested that the basis of corporate culture was an interlocking set of six cultural elements:

When thinking about this, see also our article on Johnson and Scholes' Cultural Web, which was developed about 10 years later. In total, they identified six elements that together provide a picture of corporate culture: stories, rituals and routines, symbols, organizational structure, control systems and power structures.

By examining these cultural elements across a variety of organizations, Deal and Kennedy identified four distinct types of cultures. They also identified two marketplace factors that they felt influenced cultural patterns and practices. They were:

They believed that the risk involved in making a poor decision and the time it takes to find out whether a decision is the right one both have a bearing on how cultural elements develop and influence an organization's employees.

Deal and Kennedy present these factors in a 2 x 2 matrix that identifies the four culture types, as shown in Figure 1 below. 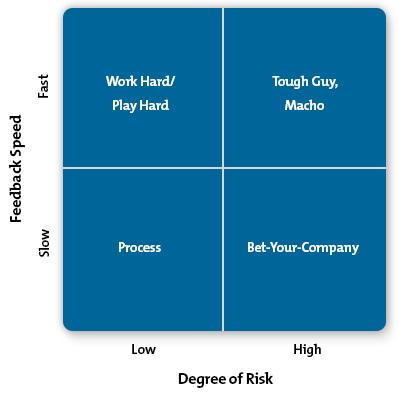 Tough-Guy, Macho – This culture contains a world of individualists who enjoy risk and who get quick feedback on their decisions. This is an all-or-nothing culture where successful employees are the ones who enjoy excitement and work very hard to be stars. The entertainment industry, sports teams and advertising are great examples of this cultural type.

Increase your productivity and reduce stress with this FREE workbook when you join the Club before midnight, October 21.

Teamwork is not highly valued in this culture, and it's a difficult environment for people who blossom slowly. This leads to higher turnover, which impedes efforts to build a cohesive culture. Thus, individualism continues to prevail.

Work Hard/Play Hard – This culture is the world of sales (among others). Employees themselves take few risks; however, the feedback on how well they are performing is almost immediate. Employees in this culture have to maintain high levels of energy and stay upbeat. Heroes in such cultures are high volume salespeople.

Interestingly, this culture recognizes that one person alone cannot make the company. They know it is a team effort and everyone is driven to excel. Contests among employees are common here, as they drive everyone to reach new heights.

Bet-Your-Company – Here, the culture is one in which decisions are high risk but employees may wait years before they know whether their actions actually paid off. Pharmaceutical companies are an obvious example of this culture, as are oil and gas companies, architectural firms and organizations in other large, capital-intensive industries.

Because the need to make the right decision is so great, the cultural elements evolve such that values are long-term focused and there is a collective belief in the need to plan, prepare and perform due diligence at all stages of decision making.

Process – In this culture, feedback is slow, and the risks are low. Large retailers, banks, insurance companies and government organizations are typically in this group. No single transaction has much impact on the organization's success and it takes years to find out whether a decision was good or bad.

Because of the lack of immediate feedback, employees find it very difficult to measure what they do so they focus instead on how they do things. Technical excellence is often valued here and employees will pay attention to getting the process and the details right without necessarily measuring the actual outcome.

You may not feel that your organization fits with any of these culture types. If this is the case, don't try to force it into one of these boxes: Pick and choose the parts of this model that work for you.

The Deal and Kennedy cultural model is descriptive. It argues that no cultural type is better than another, because the types emerge as a result of circumstances. Its value lies in using it to understand how culture evolves and how to manage the various elements that influence it. The following steps will help you to do this:

Corporate culture is very important to the success of a business. The social side of work requires as much attention as the financial side: If you neglect your cultural influences, your long-term economic performance will suffer.

Using Deal and Kennedy's cultural elements and cultural types, you can start the process of thinking about your workplace and shaping it into one where human interactions thrive. By creating and encouraging a consistent and cohesive culture, you build a strong foundation for meaningful and enjoyable work. That is the type of culture that breeds high performance, loyalty and commitment.

Download this popular 40-page toolkit for FREE when you become a Club member before midnight, October 21.