Accelerating Change, and Increasing Its Likelihood of Success

You've invested time and dollars in the latest systems and processes, you've trained everyone, and you've made their lives easier (or so you think). Yet, people persist in their old ways. Where are the business improvements you expected? And when will the disruption subside?

In this article and video, we'll look at why making personal and organizational change can be so difficult, and how to make it easier.

As someone needing to make changes within your organization, the challenge is to help and support people through these individual transitions, which can sometimes be intensely traumatic, and involve loss of power and prestige... and even employment.

The easier you can make this journey for people, the sooner your organization will benefit, and the more likely you are to be successful. However, if you get this wrong, you could be heading for project – and career – failure.

The Change Curve is a popular and powerful model used to understand the stages of personal transition and organizational change. It helps you to predict how people will react to change, so that you can help them to make their own personal transitions, and make sure that they have all the guidance and support they need.

Here, we look first at the theory behind the Change Curve. Then we look at how you can use it to accelerate change – and boost its chances of success.

The Change Curve is widely used in business and change management, and there are many variations and adaptations. It's often attributed to psychiatrist Elisabeth Kubler-Ross, resulting from her work on personal transition in grief and bereavement.

Here we're describing major change, which may be genuinely traumatic for the people undergoing it. If change is less intense, adjust the approach appropriately.

The Change Curve model describes the four stages most people go through as they adjust to change. You can see these in figure 1, below.

When a change is first introduced, people's initial response may be shock or denial, as they react to the challenge to the status quo. This is stage 1 of the Change Curve.

You can learn another 65 project management skills, like this, by joining the Mind Tools Club. Once the reality of the change starts to hit, people tend to react negatively and move to stage 2 of the Change Curve. They may fear the impact, feel angry, and actively resist or protest against the changes.

Some will wrongly fear the negative consequences of change. Others will correctly identify real threats to their positions.

As a result, the organization experiences disruption which, if not carefully managed, can quickly spiral into chaos. 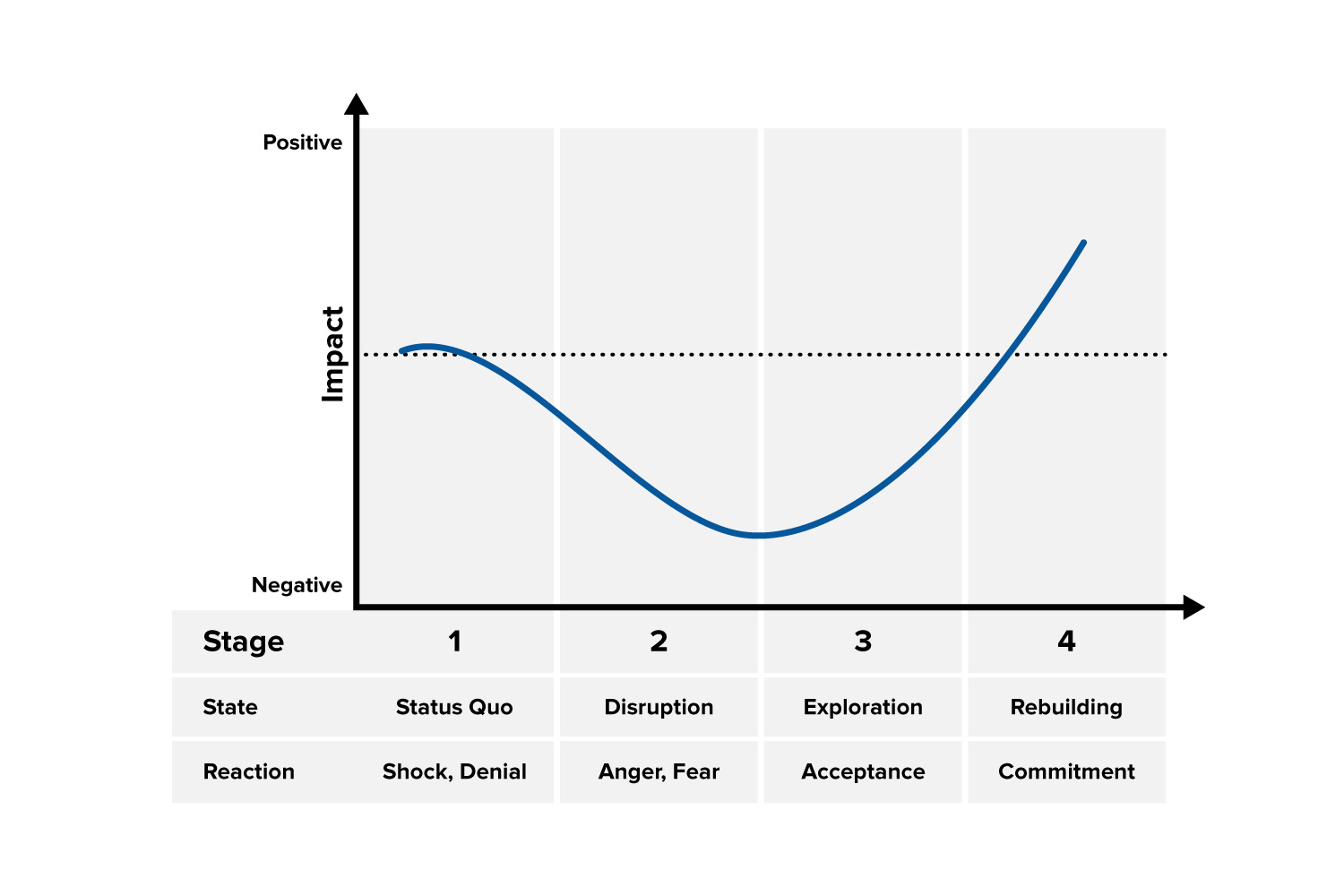 For as long as people resist the change and remain at stage 2 of the Change Curve, the change will be unsuccessful – at least for the people who react in this way. This is a stressful and unpleasant stage. For everyone, it is much healthier to move to stage 3 of the Change Curve, where pessimism and resistance give way to some optimism and acceptance.

It's easy just to think that people resist change out of sheer awkwardness and lack of vision. However, you need to recognize that change might affect some of them negatively in a very real way that you might not have foreseen. For example, people who have developed expertise in (or have earned a position of respect from) the old way of doing things can see their positions severely undermined by change.

At stage 3 of the Change Curve, people stop focusing on what they've lost. They start to let go, and accept the changes. They begin testing and exploring what the changes mean, and so learn the reality of what's good and not so good, and how they must adapt.

By stage 4, they not only accept the changes but also start to embrace them: they rebuild their ways of working. Only when people get to this stage can the organization really start to reap the rewards of change.

With knowledge of the Change Curve, you can plan how you'll minimize the negative impact of the change and help people adapt to it more quickly. Your aim is to make the curve shallower and narrower, as you can see in figure 2. 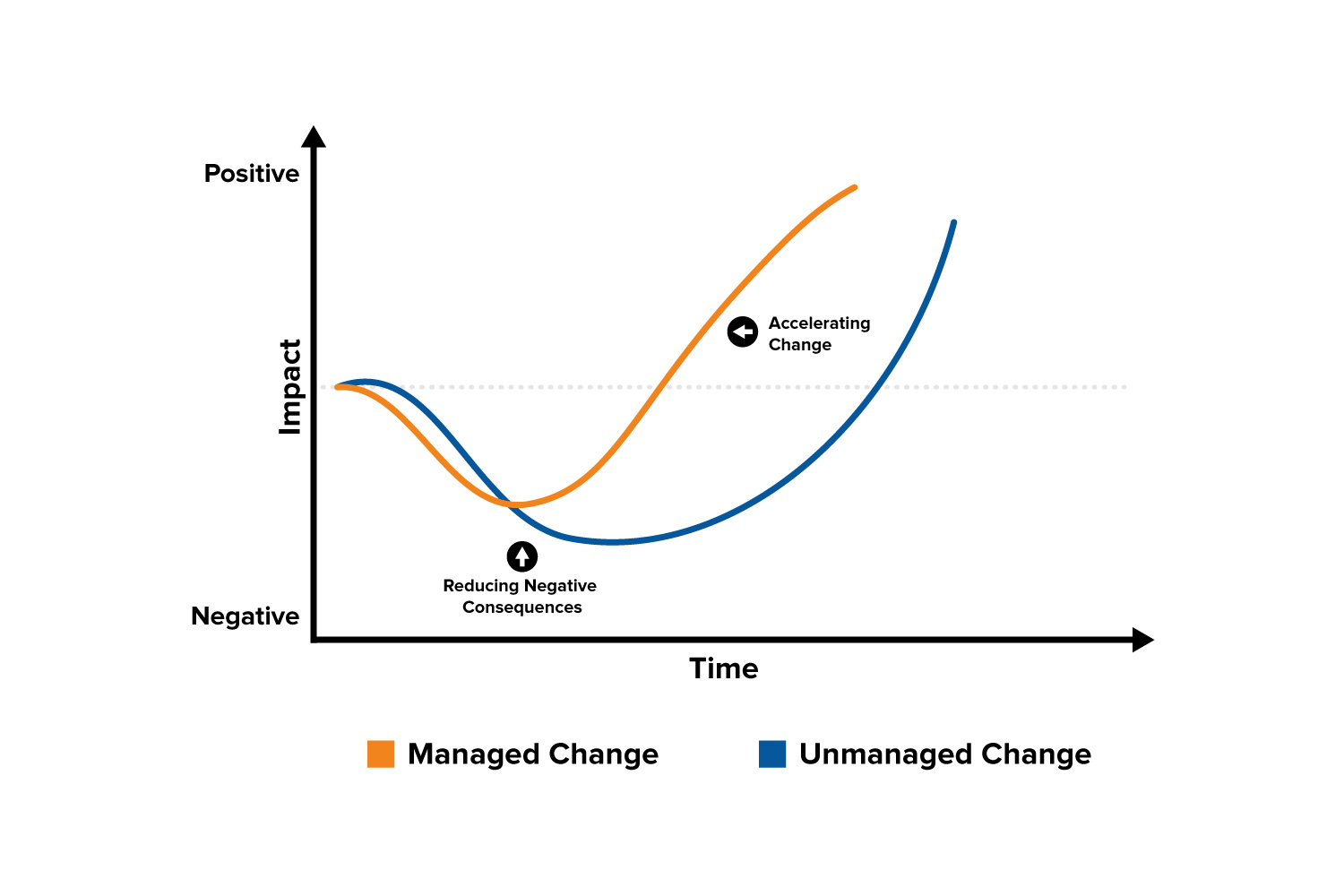 As someone introducing change, you can use your knowledge of the Change Curve to give individuals the information and help they need, depending on where they are on the curve. This will help you to accelerate change, and improve its likelihood of success.

Actions at each stage are:

This is a critical stage for communication. Make sure you communicate often, but also ensure that you don't overwhelm people. They'll only be able to take in a limited amount of information at a time. But make sure that people know where to go for more information if they need it, and ensure that you take the time to answer any questions that come up.

As people begin to react to the change, they may start to feel concern, anger, resentment, or fear. They may resist the change actively or passively. They may feel the need to express their feelings and concerns, and vent their anger.

To avoid that, this stage needs careful planning and preparation. As someone responsible for change, you should prepare for stage 2 by considering the impacts and objections that people may have.

Make sure that you address these early with clear communication and support, and by taking action to minimize and mitigate the problems that people will likely experience. As the reaction to change is very personal, and can be emotional, it's often impossible to preempt everything. Make sure that you listen and watch carefully during this stage (or have mechanisms to help you do this) so that you can respond to the unexpected.

This is the turning point for individuals and for the organization. Once you turn the corner to stage 3, the organization starts to come out of the danger zone, and is on the way to making a success of the changes.

Individually, as people's acceptance grows, they'll want to test and explore what the change means. They'll do this more easily if they're helped and supported to do so, even if this is a simple matter of giving them the time they need.

As the person managing the changes, you can lay good foundations for this stage by making sure that people are well trained, and are given early opportunities to experience what the changes will bring. Be aware that this stage is vital for learning and acceptance, and that it takes time: don't expect people to be 100 percent productive during stage 3! Build in the contingency time so that people can learn and explore without too much pressure.

This stage is the one you've been waiting for! This is where the changes start to become "second nature," and people embrace the improvements to the way they work.

As someone managing the change, you finally start to see the benefits you worked so hard for. Your team or organization starts to become productive and efficient, and the positive effects of change become apparent.

While you're busy counting the benefits, don't forget to celebrate success! The journey may have been rocky. Certainly, it will have been at least a little uncomfortable for some of the people involved. But everyone deserves to share the success. What's more, by celebrating the achievement, you establish a track record of success, and that will make things easier the next time change is needed.

The Change Curve helps to explain the impact of change, both on individuals and organizations.

By predicting the likely responses to change, you can accelerate development – and provide your people with timely help and support.

As defined by Elisabeth Kubler-Ross, the Change Curve recognizes four stages in our reactions to change:

How Good Are Your Change Management Skills?

The Kübler-Ross Change Curve is trademarked by the Elisabeth Kübler-Ross Family Limited Partnership.