Matching Roles to Characteristics With the OCEAN Model

Measure the five key dimensions of your personality with the OCEAN Model.

Have you ever worked in a job that just didn't "fit" with your personality? Or have you recruited people in the past who weren't successful in their roles, even though they had the necessary skills?

Many of us have had jobs that just weren't "right." A quiet, shy and thoughtful person will unlikely feel at home in a high-pressure sales position, where he or she has to make lots of telephone calls, for instance.

Similarly, a person who's very ordered and detailed will unlikely fit easily into a job at a start-up firm, where everyone has broad roles and is encouraged to approach tasks flexibly.

When our personality doesn't fit our role, everyone loses. We'll likely be unhappy because we feel that we don't "fit in," while the organization risks increased absenteeism, high team turnover, low productivity, and loss of investment in training if we choose to leave.

The Big Five Personality Traits model can help to address these issues. It's a test that can be used to measure a person's most important personality characteristics and which roles are the best suited to them. Recruiters can also use it to find people who have the personality, as well as the skills, to fit the roles that they are hiring for.

What Is the Big Five Personality Traits Model?

The Big Five Personality Traits model measures five key dimensions of people's personalities. It's based on findings from several independent researchers, and it dates back to the late 1950s. But the model as we know it now began to take shape in the 1990s.

Lewis Goldberg, a researcher at the Oregon Research Institute, is credited with naming the model "The Big Five." [1] It is now a respected personality scale and routinely used by businesses and in psychological research.

The five key personality dimensions the model measures are the following:

From Goldberg, L.R., 'The Development of Markers for the Big-Five Factor Structure,' Psychological Assessment, Vol. 4, No. 1, 26-42, 1992, published by American Psychological Association, Inc. Adapted with permission.

The Big Five Personality Traits model is sometimes called the OCEAN model, after the first letters of each dimension.

Measure the Five Key Dimensions of Your Personality

Many websites allow you to take the Big Five Personality Traits test for free. You can find a popular version of it here.

How the test is scored will depend on which one you take. If you take the one suggested above, it will give you a score for each of the five personality traits, and will let you know if you scored higher or lower than others who have taken the test.

Other tests give you a score that is a series of letters and numbers – for example, O93-C74-E31-A96-N5. The letters stand for each dimension, and the numbers are the percentage of people who scored lower than you for each of these.

Refinements of the Five Factor Model of Personality

Although the simplicity of the Big Five Personality Traits model is one of its most appealing features, some researchers have argued that measuring complex factors such as "job performance" requires a more detailed model of human personality. In light of this, academics have sought to improve the model in recent years.

In 2013, for instance, researchers Timothy Judge, Jessica Rodell, Ryan Klinger, Lauren Simon, and Eean Crawford published an updated version of the model that breaks the five personality traits down into more detailed characteristics. [2] They labeled these "facets" and "sub-facets" (see Figure 1, below).

Figure 1: Hierarchical Representation of Personality Traits Including Facets and Sub-Facets 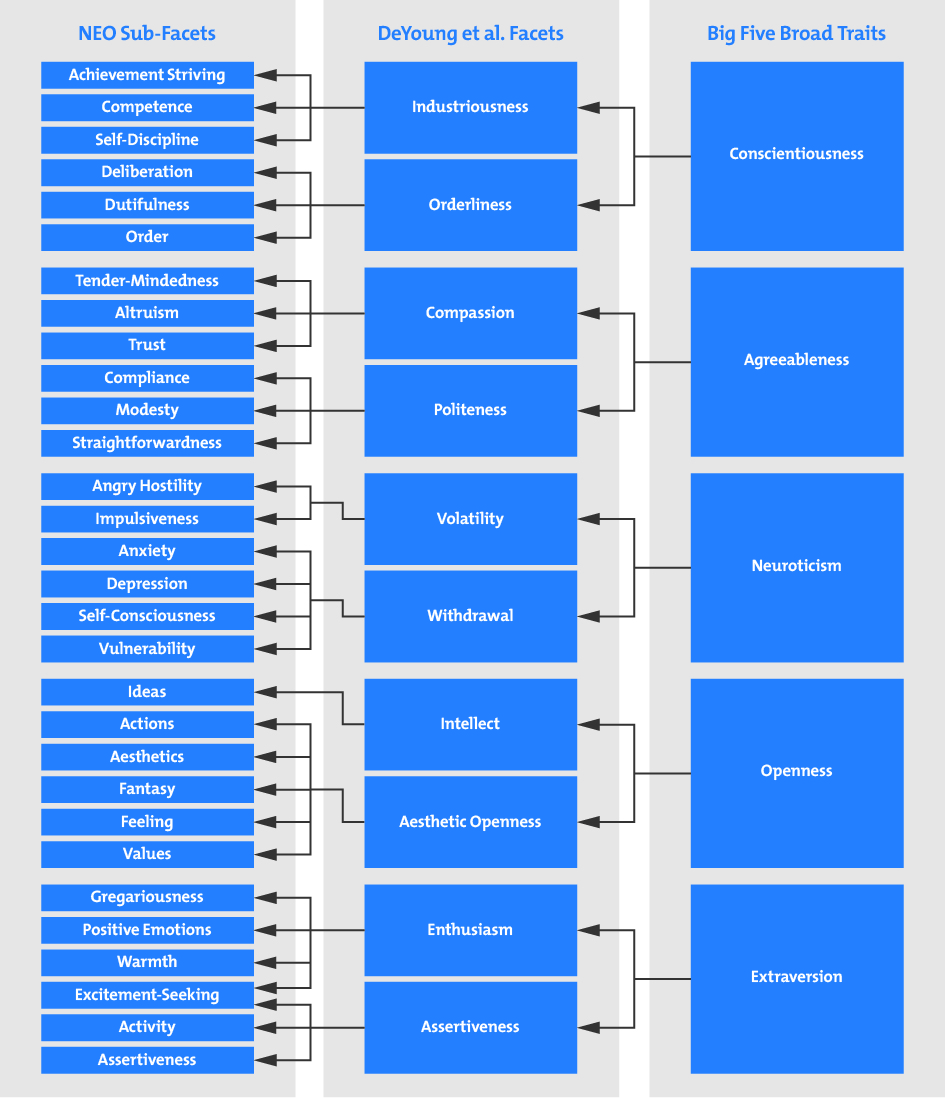 As figure 1 shows, each personality trait is divided into two facets. These 10 facets were proposed in 2007 by psychologists Colin DeYoung, Lena Quilty and Jordan Peterson in their paper, "Between Facets and Domains: 10 Aspects of the Big Five." [3] This version of the model is known as the Big Five Aspects Personality Test. Find out more about it here.

Judge's team of researchers built on the 10-facet model, by breaking each facet down even further into 30 sub-facets (see figure 1, above), which they published in 2013. These sub-facets are based on a model known as the NEO Personality Inventory©, which was first developed in 1978 and revised in 1990 by psychologists Paul Costa and Robert McRae.

Judge's revised model is also known as a 6-2-1 organizational framework, as each assessment is built around six sub-facets, two facets and one trait.

If you find the original Big Five Personality Traits model to be too broad or imprecise for your purpose, then Judge's approach may be more helpful. It provides a more detailed understanding of each personality trait, and can, therefore, help you to identify more accurately which jobs will likely suit you best or which candidates will best fit into your organization.

Increase your productivity and reduce stress with this FREE workbook when you join the Club before midnight, May 24.

How to Use Your OCEAN Score

So you've taken the Big Five Personality Traits test. What do you do now?

Using the Big Five Personality Traits For Your Job

Use your test score to determine whether you're in the right role. For instance, if you scored high on extroversion and natural reactions, you probably feel at home in a crowd, but you'll also likely get stressed and nervous easily.

If your current role involves a lot of pressure – for instance, if you have to meet ambitious targets or tight deadlines – or if you are isolated in a cubicle for most of the day, you'll likely find work hard. This could be because your personality doesn't suit the type of job you have.

If this is the case, you can use your test results to identify a new role or career that would fit your extrovert personality more closely. Alternatively, you could seek out new tasks or a different role within your organization that fit your personality better.

Use the test to help you to identify accurately candidates who will suit the demands of the role you are recruiting for and your organization's culture.

To start with, look at the position's responsibilities and ask yourself, would it suit a team player or someone who's able to work well independently? Is your organizational culture structured and bureaucratic, or flexible and relaxed? Will the role require a lot of creative problem solving, or will it involve adhering to more structured processes and routine work?

Once you've identified the "personality" of the role, use the Big Five Personality Traits model to assess how well each candidate's personality fits the position and the organizational culture. You may also wish to use other recruitment tests to improve your candidate selection process.

Remember that the Big Five Personality Traits model gives only an indication of what roles might best suit you (see also our article on Holland's Codes for another approach to this), or what candidates may be best for a role. Be sure to base your decision on a range of information, and not solely on the results of a personality test.

The model was developed between the 1950s and 1990s by a number of different psychologists, culminating in a 6-2-1 framework that assesses each personality trait on two facets and six sub-facets. In total there are five traits, 10 facets and 30 sub-facets that someone can be assessed on.

You can use the model to gain a better understanding of your personality, and the types of roles that are most likely to suit it. You can also use it as part of your recruitment process to help you to identify people whose personalities best match the roles that you are recruiting for and who will, therefore, be more likely to succeed in your organization.

Get unlimited access to all our career tools, community and career coaches - plus this 40-page time management toolkit FREE when you become a member of the Mind Tools Club before midnight, May 24.

Take Control of Your Time With This Free Workbook

Download this popular 40-page workbook for FREE when you become a Club member before midnight, May 24.