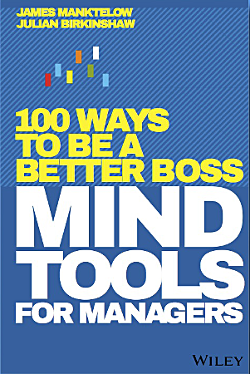 Mind Tools for Managers:
100 Ways to Be a Better Boss
Research Methodology and Results

More than 15,000 managers across the world contributed to Mind Tools for Managers: 100 Ways to Be a Better Boss. They provided us with their views on the most important tools and techniques in each area of management, and this helped us to make the final selections that appear in the book. This note provides some additional information on the methodology we used, and we also list the tools that did not make the cut.

The first step was to draw up a longlist of tools. Mindtools.com website lists more than 1,000 tools, frameworks and concepts, so this was our starting point. As we began to categorize the tools, three concentric circles (Manage Yourself, Manage Your Work and People, Manage Your Wider Context) emerged as a simple organizing framework, and each circle was then further broken down into coherent elements, giving us the 18 chapters that constitute the book.

For each chapter, we put together a longlist of 10-12 tools, based on our own judgment and analysis, and also on their popularity on the MindTools.com website. For the online survey, we then asked the respondents to identity the top five most important tools from this list. This was an important point in our survey design. We could have asked respondents to evaluate each tool in turn on a 1-7 scale, but this approach typically leads to similar ratings across the board (i.e, all the tools are important). Our design was a way of forcing people to make choices, to say that tool X is more important than tool Y.

The sample of managers we sent the survey to were users of MindTools.com. The full-length survey would have taken about 40 minutes to complete, so we split it into thirds - some people got one set of questions, other people got the other sets. In total, we sent the survey to approximately 850,000 people, and we received 15,242 responses. Table 1 provides a rough breakdown of the nationalities, age, experience, and gender of the respondents.

For each chapter in the book, we ended up with a ranking of tools, and we have included these rankings in the pages that follow, for your interest. A score of 70% means that of all the respondents to the survey, 70% chose that tool in their top five. As a general rule, we chose the top five or six tools in each category to feature in the book. There were a few cases where we used our judgment, promoting one particular tool ahead of another because we felt it was sufficiently important. For example, Agile Project Management has boomed in recent years, and we felt it needed to be included, even though many of our survey respondents did not include it in their top five. We also added the idea of Transformational Leadership, which we had not included in our survey.

Below, we list the ranking of tools for each chapter in the book, highlighting the ones that are included and noting the others that didn’t quite make the cut.

Table 2. Ranking of Tools For Each Chapter